I remember the Gravy Train when it first opened. It was about the same time I moved into the area. S.K.Y. had a few cafes and the area was still finding it’s feet. The original Gravy Train was in the building that now houses Gourmet on Gamon. This is where the foundation of their business was laid. The original owners then moved across the road to their current address. They had already built up a fabulous business with sensational food and coffee and when they moved (into the old stables restaurant) they showed a flair for creating a wonderful space to eat in. Using fantastic furniture, red walls with original art work for sale and an open fire place it was always a pleasure to visit.

The Gravy Trainhas new owners and the Façade has had a facelift. Like a lot of Facelifts it has not been done well. This is unfortunate and I keep hoping it’s not finished and it’s just an undercoat but if there is another coat to go on then it is taking an awfully long time! Disappointing. However, there is a saving grace and that is the lovely herbs planted out the front. This is encouraging and perhaps suggests not is all lost at the Gravy Train.

On walking inside, the previous owner’s flair is still in place. Thank God. The walls are still red and the furniture etc is still the same. There is a function on in the backroom and a few other patrons. There’s plenty of choice as far as sitting is concerned. Shall we sit on Gamon St or should we sit in the front courtyard, or inside by the fire or perhaps towards the back room. Wherever you choose to sit you get a good view of the goings on in the café. There is one familiar face in the café and another staff member. They must have been busy with the function because it took quite a while before our table was approached and an order taken.

On delivery of the food I was not given the relish that I ordered. In the good old days of the Gravy Train I thought their breakfast was the best in Melbourne and part of that breakfast was the relish. Although it is not part of my weekly regular order I could not resit it. It did not appear and I did not chase it.


There is something that is lack lustre and although the décor is there the atmosphere just isn’t. I can’t put my finger on it and it made me feel like I couldn’t be bothered. My breakfast was nice but I really did miss that relish! R had some toast and showed me a corner which could have had mould on it, she put it to the side and we discussed whether or not it was mould. It was questionable but it could have been discoloured flour. Funnily enough the girl sitting just opposite us had the same problem and she spoke to the waiting staff about it. The waitress dealt with this extremely professionally and was quick to quell the myth of mould and brought out the loaf of bread to show her that this type of bread had that appearance. She had a very effective argument finishing with the bread comes in fresh everyday.

Have we discussed tea in those teapots that are so generic. Is that the right word? These teapots are in some cafes, but they are also in canteens, in hospitals in pokie joints, you get the picture. Why would you use them in a café??? They are horrible and should be banned from all local cafes at least. 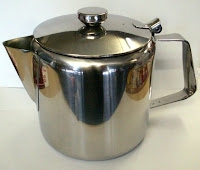 At the end of the day though the Gravy Train serves a good breakfast and is among the cafes that are good value for money. Personal taste does account for a lot and you may not feel as I do, so check it out for yourself .