Living and Eating in Gamon Street 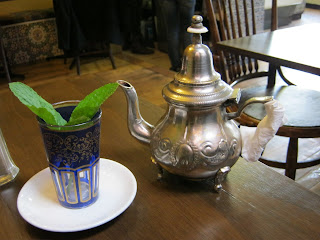 Oh my Lord! It's July!
It's been a while since I've Walked Gamon St. There's a new cafe, which I wrote about in May, Cafe Advieh, but mostly we have the established Businesses, such as Gourmet on Gamon, The Gravy Train and Le chien. As Well as the Cafes we have Sedonia, for a spot of jewellery/homewares shopping, we can buy our pets treats at Pets @ Gamon Street and we can beautify our selves at Wax and Relaxed. We can also take our kids to the park at Harris Reserve, we can buy Pizza from Cuoco's or we can hang out at Sabrosso's on a beautiful sunny afternoon on a bean bag with a glass of sparkling. A whole day could be spent walking from one end to the other. First I would start with Breakfast. After visiting each of the cafes offering Breakfast I have decided my preferance, but would that be yours? As alway food is personal and everyone's personal taste is different.
It's about 10 years since breakfast has taken off to the extent of the popularity it has today and in that time Breakfast dishes have evolved. But do you like the original Brekkie? The Eggs, Bacon and sides of mushies, tomatoes and spinach! If you do then my suggestion is Gourmet on Gamon. They do a fantastic traditional breakfast, which is perfectly cooked and presented. They also do a chai latte which at the moment is my choice of hot drink, which is fairly standard as well. From a premix. The day I visited the cafe was fairly busy but the service was very friendly and I didn't wait too long at all!
The latest breakfast Spot is Cafe Advieh. I had lunch here in April and I have to admit I was really looking forward to my first breakfast here. I was not dissapointed! The food here is really delicious. Simple fare with a twist of mediterraen/middle eastern. Yummo! I ordered the Avieh which consisted of 2 fried eggs, grilled haloumi, tomatoes , olives, cucumber and turkish bread. The turkish bread was slightly toasted in olive oil, exactly the way I like it. A fantastic start to the day, a perfectly cooked breakfast. I love that it is almost like a standard breakfast but it's not! My guest ordered the Turkish Omelette, which was thouroughly enjoyed and I was texted 8 hours later saying that she was still enjoying the flavours of breakfast, especially the Turkish sausage. The Lingering taste says it all. My biggest issue was the emptyness of the cafe. It was 9am but it was cold and empty. 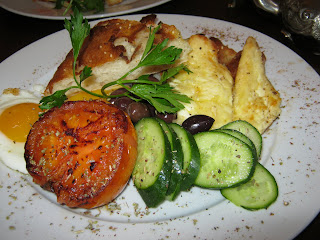 Where are you people? It is definetly worth a visit! I finished this breakfast off with a Morroccan Mint Tea which was absolutely refreshing and served in a traditional pot and glass! Loved it!
Over at the Gravy Train on another cold winters day I was looking for something sweeter. I think the Gravy Train has the biggest Breakfast Menu. Big to me can often mean average! It means that the chef has a lot of preparation to do instead of doing just a few things really well. My breakfast was an example of this. 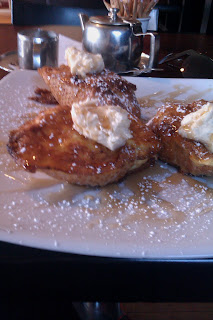 I had the french Baguette, stuffed with banana and topped with marscapone and maple syrup. As you see from the photo you can see that it is huge. I found that off putting to start with and I really wish that cafes/restaurants would halve their serves. All they have to do is reduce their prices by a third and they would make more money and have less wastage. We do not need to eat that much food. But back to their variation on French Toast. The Mascapone(?) was overwhipped and was off putting. It was nice to have some banana but really I did not enjoy this dish at all. I don't think it worked the way it was put together it was just too chunky. The Chai latte was in one of those dreadful canteen pots and a Kraft sachet of honey was on the side as well as hot milk to add. A different way again of serving Chai but not unpleasant.
Last but least is Le Chien and the Promite Special. Where would Seddon be without the P.Special. I have to say that on certain days I wake up craving the P.Special, I just walk myself down there to indulge in the perfectly ripe avocado with perfectly runny poached eggs with the tomato(sometimes a little under ripe)and the parsley, of course on top of the ciabatta toast with butter and promite(the perfect amount spread). And don't forget the squeeze of lemon.
This is a CLASSIC dish and should be considered along side such famous dishes as Eggs Florentine or Eggs Benedict! Because of the obsession I have with this dish, of course I have failed to try other dishes on the menu. I remember once trying something else and wishing the whole time that I was eating the P.Special. Any Suggestions on other dishes that could surpass the P.Special? As I am going throught the Chai Spell I ordered one here with great apprehension as I have had very average chai's here.This day was no exception . Warm milk(not hot, like I like it)with very faint suggestions of cardamon, cloves and cinnamon. MMMmmmm wish it was better. On the positive side I preferred this to the other offerings on Gamon St.
So in which one of these cafes would you have breakfast, in which one does your personality shine and which one is you local?
Posted by Monica Geller at 11:50 AM No comments: