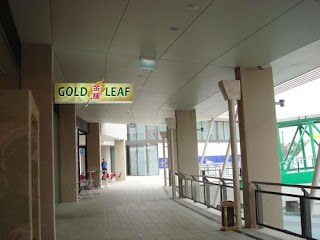 How good is a review? How long after it is written is a review relevant? Each time I review or blog about a cafe/restaurant, what does it mean to you when your palate is completely different to mine. Or We could share very similiar tastes in food and you follow my blog and agree with what I have written, but what if the night you go into a cafe I have blogged about and unbeknowst to you it is the Chef's day off and you have a temp cooking for you. I have decided that I will test this theory this year and do some follow-up reviewing.

I will start with a Vietamese restaurant that was given a few lines in the Age last year. It wasn't a rating review but because it was in Footscray and close to me I thought I would like to try it. My favorite in Footscray is Huy Huy and I do feel guilty when I eat anywhere else. Trying other restaurants also makes me realise how consistently good Huy Huy is.

The restaurant is in the Footscray Mall, not what you would call the most inviting place. The mall has a reputation and I find it hard to see it improving in the near future. There's no doubt it has potential but so far no one in the council or in the traders association has been able to reach it.
When I walked into the Star Restaurant it was empty. It is a very old building and actually a great space for a restaurant. There was a table of Vietnamese people, they were not customers they were just hanging out there. There are booths which I quite like and myself and guests sat down. It took a while for the waitress to move from her buddies and serve us. There was a man behind the bar who did not register that we were in the restaurant. The waitress spoke very little English. It was very difficult to order.

There is a very big menu and not cheap! We ordered the Vietamese Chicken salad, salt and pepper calamari, beef and vegetables. We asked for fried rice and the waitress said they didn't do fried rice, it was not on the menu as a separate dish. Whether there were language problems, I'm not sure but I did think that fried rice was universal language. The same with wonton soup. Okay! MMMMMmmmm I started to worry. Was this restaurant just trying to be a bit different and a notch above the rest by not having common vietnamese menu items or did they just not want to do them for us. It was quite weird, oh they did do steamed rice!
The chicken salad was dreadful! It should have been listed as chiken skin salad, not of the yummy crispy variety, but of the boiled chicken skin variety. It is making my skin crawl as I write about it. Very little chicken, some carrot and coriander and a nice dressing. All for $16.00! Did I feel ripped off, cannot tell you how much! This scarred the rest of the meal for me. The other two dishes were fine. The whole cost of the meal with a couple of soft drinks was $65.
They didn't take credit card so we pooled all our cash and we were out of there as quick as possible. My overall feeling is that they didn't really want us as customers and did absolutely nothing to make us want to come back.

To be fair to the original reviewer, we did not eat what they ate, however even if all the food had been fine the atmosphere was dead and the quality was no way near that of Huy Huy!

Now to a much more positive experience. Again I read about this in the Age and again this was not rated but just listed as a great place for Yum Cha!
Great is not the right word, Sensational would describe this experience for a lazy sunday afternoon. It did not start off well, we had a booking for 1.30 and it was very difficult to get seated. It is a huge restaurant and it was full and people were spilling out the front door and lining up. They have 2 sittings and this was the second one and obviously it was difficult as people weren't finishing as they should at the end of their sitting. The other difficulty was the maitre d had no logical system to seat people. We watched and learnt as people pushed their way to the front, pointed at their name in the reservation book and then were seated. It took us 15 minutes to learn that this was how you got seated.
Once we were seated(in very low but extremely comfortable chairs)it began. The service was excellent. Drinks were ordered and came straight away. An extremely well priced wine list was very satisfying to read.

And then came the food! Yum Cha is a tradition of drinking Chinese Tea and eating small portions of food. The small portions of food come around on trolleys in bamboo steam baskets. It was great fun looking and working out what was what(limited English for the waiting staff was a common problem) and then trying your choice. Yum Cha is mostly Dim Sum(it literally means a 'bit of Heart' but is actually lots of steamed or fried dumplings) but there are other choices, such as pork belly, which was so sublimely cooked, pickled fish and chicken feet(confession, I am a wuss and had no desire to try the chicken feet). There is lots and lots of different kinds of pork and prawn dumplings and they are all delicious. The springrolls were extroadinary, the best I have ever had! Once you have had enough savoury there is also sweet yum cha, which looks so bright and colourful, this is also a must. I have to admit , I ate and ate and ate until the custard filled doughtnuts(which I highly recommend) said to me how will you fit us in!
When we asked for the bill we were all a bit concerned because we had no idea how much this was going to cost. The way they charge for each dish is with a cross in a box on an ongoing order sheet left at your table. There were about three different sections obviously falling into cost categories. So imagine our surprise when the bill came back at $40 a head. That included one bottle of wine and soft drinks. Amazing, considering I was so full I didn't need to eat for days after! If you are looking for a nice way to spend a sunday afternoon I couldn't recommend anything better.
Posted by Monica Geller at 11:10 AM No comments: