Has anyone else noticed that a certain smiley face has been missing from the SKY cafe scene? I am sure that most of the women in the area will be aware that Matt from The Corner Shop has been missing for quite some time now. Matt was a bright spot in the lives of many a bored SKY housewife and he is sorely missed. Formally of Le Chien, Matt moved to The C.S. when the Munroe's opened earlier this year, and spread his joy to the village. Some of you may not know that Matt is actually very rock and roll - he is the guitarist for BEDFORD, and it turns out this is one of the reasons he has left us - to concentrate more on his music.
So although we miss him we wish him the best of luck and hopefully we'll still see him around the hood when he's not off being famous! 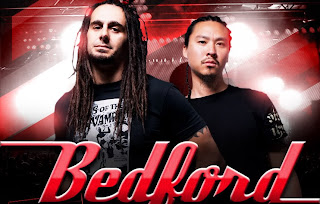 BEDFORD -
WINNER of L.A. Music Awards "Single of the Year" for "I Am Alive"
Awarded Album of the Year on Australian Internet Radio.
Two songs 'Pray' and 'Free Spirit' hit number one on the top 33.3.

Rachael
Posted by Rachael at 2:37 PM

I wondered where he had gone. Thanks for the update.