Rachael, have you heard about the February Fast? Apparently it is all the rage! No alcohol for the month of February! Are they nuts? The month of February has seen me out and about - a very busy month and I don't think I could have survived it without the odd tipple. We are only half way through! In the middle of the month we have the Yarraville Festival and at the end of the month we have the Seddon Festival. Throw in a couple of birthday dinners and other dinners just for the hell of it and you have one indulgent month..
I have been to Taxi (Yes The Taxi at Fed Square), Huy Huy a couple of times , Famous Blue Raincoat, The corner shop and the latest addition to Yarraville Village - Dig a Pony. I have to say that all of these are fabulous places to have dinner for different occasions. Can you believe that on a Sunday Night at FBR you can have a steak with salad for $12! And the steak is porterhouse and the steak is tender! What a Bargain! 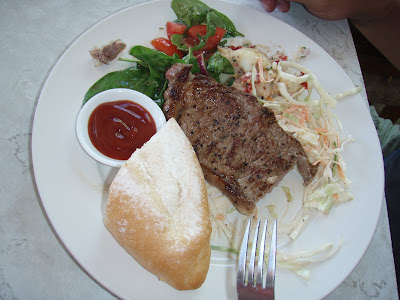 Oh and the grilled lamb cutlets at the Corner Shop have got to be the best around - Salivating! Some friends of mine from the other side of town come across to watch movies and eat those lamb cutlets (not at the same time, although not a bad idea). At Huy Huy I'm stuck on their lemon chicken at the moment. Sooo bad for you but unbelievably yummy! As for Taxi, WELL it was so delicious - a degustation menu which included tuna sushimi, scallops, sticky pork, ginger and apple salads, an incredibly sweet (but not too sweet) soup with a rabbit wonton and shitake mushroom, spatchcock (superb), kingfish and for dessert chocolate tian, white chocolate ganache, and passionfruit foam. You think that would be the end of it but no there were petit fours, which incredibly we could fit in.
Last but not least we have the new tapas bar in the village. Dig A Pony. 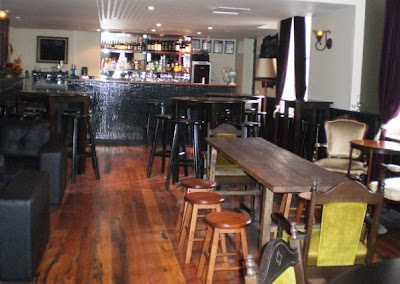 Very exciting when a new establishment opens and it is good. The tapas that we had were excellent, perfectly cooked and so, so tasty. Highly recommend you get yourself down there. Their cocktails are very reasonably priced, all though I was only able to sample one (recovering from the night before). I look forward to working my way through their list. So you see there is no way I could participate in the February fast, or March, April, May or June, we'll see after that!
There I was last week complaining about the photo you put up of me and you know what I think that might actually be flattering compared to what I feel like now!
Posted by Rachael at 6:42 PM

Thanks !
Appreciate the kind blog, and look forward to seeing you again soon !
Cheers, Mike @ Dig A Pony