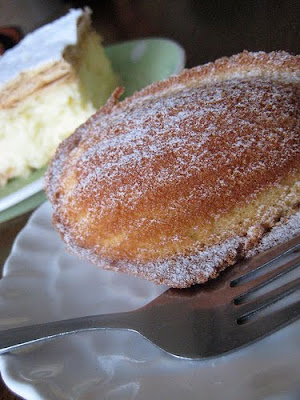 Did you know that Hausfrau has the best Vanilla Slice in Melbourne. According to The Age's Top 5 book it does. Isn't that wonderful! Sally Roxon, Chef, at Hausfrau, has been providing SKY residents with more treats than Vanilla Slices over the years. As the original owners of the Gravy Train they held the top spot for Breakfast in SKY, according to me. However when they moved to Hausfrau I was disappointed to see that full breakfasts were no longer on offer.

What is on offer for breakfast at Hausfrau? Well not much I'm afraid, they have a few items but your traditional eggs breakfast is not one of them, they do have a bacon and egg baguette (if not sold out), croque monsier and bircher muesli (see 2009 review) and a couple of other items but nothing really made to order. I understand that Hausfrau is predominately about cakes and hence I suggest if you have a sweet tooth at breakfast time, get yourself down there because this would be the place to be in SKY. I did have cheese on toast with the relish but I can't rave about it because there was nothing special about it. It cost me $12 with a cup of tea. I wouldn't have it again. However I would like to try the cakes one by one, all in one sitting ..... now I am getting carried away, maybe just a couple at a time. Some suggestions - the sachertorte, or the hummingbird cake or the plum, or the.............. Oh if only my waist would allow this. Life is so unfair. How can a person such as me who adores food, who is devoted to food, have to watch what they eat. It's just cruel!!!
(above photo courtesy of Flikr/GemmaJones)
Posted by Rachael at 9:44 PM