78 Charles Street
Seddon
9689 5055
Now, I feel a bit remiss here, because this has got to be one of the longest standing cafe's in SKY, in fact it has been here ever since I have. It hasn't changed much over the years and to tell you the truth I haven't felt compelled to go in. However with this blog I don't think we can just leave it out. So in we went and as is often the case we were pleasantly surprised. This shop has an earthly feel to it with the exposed brick walls and the floorboards. It has a courtyard out the back which I think is a bit daggy, sort of like Nonna's backyard, and it is covered over so it's not an open to the sky courtyard but none the less, it's okay. The breakfast menu is on the blackboard and very reasonably priced. I asked the waitress (table service and counter service) what would she suggest as the healthiest item (which by the way is going out the window next week, too boring when there is so much to choose from) 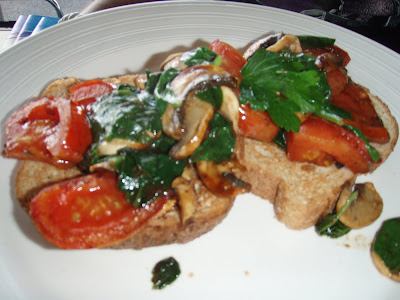 She suggested spinach, mushrooms and tomatoes on toast. It was nice but could have had more seasoning. No butter on the toast which I thought was good because I asked for healthy. Did it fill me up? NO, I must have a bottomless pit! Rachael had an omelette (which was very hearty - heaps of ham and cheese). 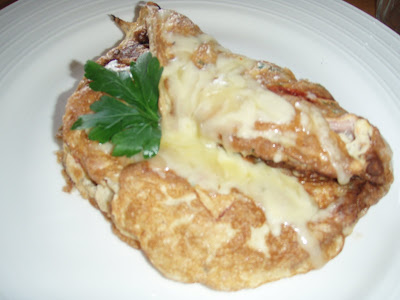 Unfortunately we quickly slipped back into old habits - We looked at each other and instantaneously we both know that we need to have something sweet. Eyes darting around the cafe, what can we have without feeling too guilty. Muffins okay but one or two? Two? No one, no two, alright we'll order one and then if we want more we can always order another. Unfortunately we shouldn't have even ordered one, it was not a very good muffin, extremely dry with minimal fruit but it did stop the sugar craving (for me at least). Tea was a Twining's tea bag (price?? Couldn't see a price list for drinks anywhere, will have to ask next time), it came in one of those cafeteria style teapots. The coffee is coffex and there was a constant stream of customers for take-aways. Talking about customers Rachael and I noticed that the average customer was of the male tradie looking variety quite a nice surprise giving us lots to chat about. 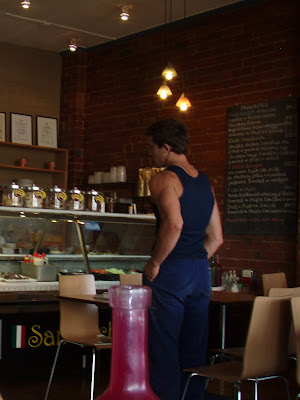 Also I have been told that the Bulldogs like to hang out here. There is a contingent of Italian looking men and the Hair dressing man from Maggio's next door is the main attraction. Is he the owner? maybe?
It wasn't an expensive breakfast, costing $19 for the spinach, tomatoes and mushroom on toast, 2 pots of tea and one muffin. There is a standard Lunch menu with sandwiches as well as burgers, parmas and calamari. They also have the standard brought in cookies and slices. One thing that caught my attention was an excellent wine list. Mostly wines from South Australia and New Zealand, perhaps this is more of a lunch venue.
Posted by Rachael at 6:59 PM