Java
It's been two years since I have blogged about Java. In that time I have been in there for a few cups of chai after a movie but that is about it. To be honest it was hard for me to walk in. In fact Java was not my first destination, the new cafe where Funky Monkey was for 2 minutes last year was. Needless to say it was not open and I could not even find it's name. What happened to Funky Monkey??? It was sooooooo hard not to walk into the Corner Shop and just have some lovely baked eggs and a pot of their chai. But in fairness to SKY and the Blog and I thought it was time I gave Java another go.
The menu is the result of being a member of the Red Engine Group. Nothing new, nothing exciting, very similar to the Gravy Train. The Red Engine Group is a company that owns quite a few cafes around SKY and surrounding areas. It creates spaces which are very humdrum in my opinion. Their cafes are money making machines in great locations with buying power which makes them cheaper than other cafes. Although the menu at Java is basic my breakfast was delicious. I ordered the mushrooms, spinach and fetta on sour dough. However the white bread they call sourdough doesn't taste like sour dough to me . Still this is great value at $10 and shows you how effective buying power can be. Serving all the usual suspects Java does not pull any punches with the menu. You can the pancakes, the porridge, Muesli, French Toast and Eggs with all the sides. Still serving tea in the old canteen pots Java's Chai is surprisingly good. Not as good as across the road but better than a lot in SKY. Chai is also great value at $3.50.
If you want to taste real sour dough then hop on down to Victoria St to the SourDough Kitchen. Also read on after review as I have just recently been there(at least once or twice).
Java is not an inviting space. Some love and attention to the interior would really benefit the atmosphere and ambiance. As I sat there on a very cold morning, with the door wide open I could not help but notice the paint peeling off the walls, the floors looking very unswept and a lot of cakes sitting in the deli fridge looking quite tired.
It is a toss up when deciding where to eat breakfast, I guess everyone is looking for something different and it hugely depends on time and money in your pocket. It you are a bit skint Java with fill your belly but probably not your soul. 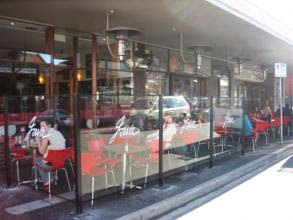 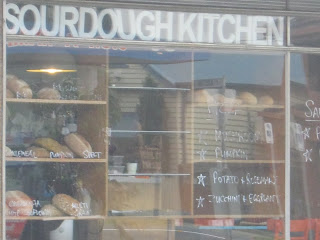 SourDough Kitchen
172 Victoria St
Seddon
Breakfast here is a very casual, non egg event. Should I have a chocolate croissant or a plain croissant. I thought this would be the extent of my decision but when the young chap threw a plum jam croissant into the mix, I knew which way I was going. You must go and have a plum jam croissant! Yes YOU must!
The Chai is not bad here served a little bit different from everywhere else but nice and goes with the plum jam croissant..
A little Tibit - There is a new Italian style deli, fruit and veg and butcher going into the old furniture shop in Victoria St. Very Exciting SKY Goss!
MAISON AMA LURRA
123 Howard st
North Melbourne
It is always nice to have a change from SKY and see what else is happening in the surrounding suburbs. North Melbourne is and always has been a leader in the establishment of new cafes.
Ama Lurra is certainly a new approach to cafes, whether you like it or not is again dependant on your own style. A warehouse conversion, with polished floors and steel furniture your first impression may be that it is quite cold and clinical. However I did not feel like that once I was seated on one of the couches with the sun shining in. With mags and newspapers at my disposal I was quite comfy and warm. There is the potential for a lot of customers, however on the day I was visiting it was quite empty and echoey. The menu is quite small but very French and all sounded delightful.. French open sandwiches and Platters of Charcuterie. On display were some macarons but really the display needs to be jazzed up. I had the Croque Maiden Ama Lurra. Really, just an open toasted ham and cheese sandwich with some house made relish. However the ham was off the bone and the cheese was more than tasty. It was a quality toastie served with a lovely light green salad.
Now you know that I am a tea drinker! I have been enjoying chai for some time as I had become tired of drinking English Breakfast out. Well, I have found that the tea at Ama Lurra is certainly one of the best. Imported from France, Mariage Freres, makes a beautiful French Breakfast Tea. In the menu description I was a bit dubious as the tea was described as having hints of chocolate and orange. I asked the waitress and she said you can't actually taste these flavours. It does have a beautiful chocolate and orange aroma . It was a lovely subtle tea to drink with no particular flavour . Don't be alarmed if your tea does not arrive within 5 minutes. Part of the process with these teas is that they are brewed for 9 minutes.
On further research I have found that Mariage Freres is a Tea House in Paris opened since 1974. The teapots are just gorgeous and the best I have experienced in Melbourne. quite exciting really, a little bit of Paris in Melbourne! I look forward to going back to Ama Lurra for more tea and perhaps trying the macarons. 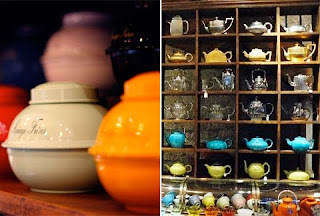 Posted by Monica Geller at 6:19 PM