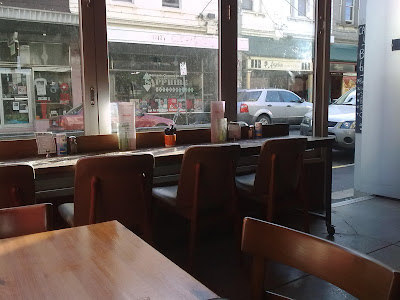 Destination destination! Position, Position, Position! Café Urbano is right in the centre of Yarraville Village. It’s quite unassuming, no big signage just a blackboard with the menu and a glass window showing the patrons enjoying the coffee. It’s got a rustic European feel to it and it certainly has that lovely coffee aroma and wonderful smells coming from the kitchen.

Café Urbano has a lovely display of food at the far end of the café. Everything looks fantastic with once again that rustic feel to it. The food looks fresh, colourful and inviting and even though I’m here for breakfast I’m wondering when I can get back here for lunch.

There seems to be a combination of table service as well as ordering at the counter. The lovely young girl who we found out is in love with Chuck Bass(Gossip Girl) brought us our first cup of tea. And I’m cringing as I say this but there they were again, those hideous generic teapots. I must say I was quite shocked because the last time I was here this was not how the tea was served. Moving right along!

Breakfast was great! Beautifully poached eggs and beautifully seasoned spinach. Yummy tomatoes and mushrooms. Funnily enough I can’t remember what sort of bread the toast was but it couldn’t have been bad because I would remember. Rachael had a fabulous looking omelette which she said hit the spot. With these cold winter mornings eggs and sides sometimes aren’t quite enough and occasionally I get a craving for something sweet afterwards. Usually another cup of tea would suffice but this particular morning I wanted more and decided to order a friand. A friand is a little cake originating from France. They should be made with almond meal and generally have some fruit folded through. The Urbano friand was not crash hot and I was a little disappointed. When the second pot of tea came out surprise, surprise not the generic tea pot but the tea brewer( is that what you would call it R). Anyway whatever it is called, it is much more preferable. Much nicer second cup of tea. 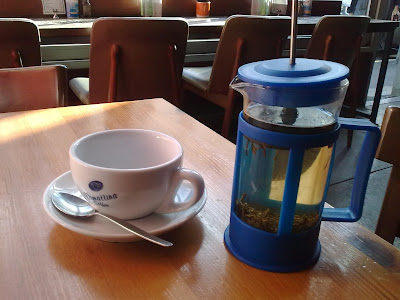 A nice little touch is the collection of grandma spoons. Did you have a grandmother (usually of Scottish or English descent) who collected souvenir teaspoons where ever she went? She may have donated her collection to Café Urbano. Cute idea.

As busy as any other café in SKY it is really worth a visit for the breakfast. It’s great value at around $15 including a cup of tea.
Posted by Rachael at 10:52 AM